The first week of June, we were still living at the old house, but by our closing date, we were ready to move the last of the furniture and set up a new household. 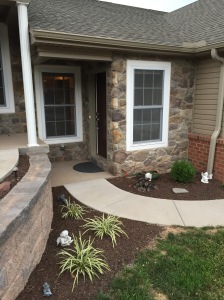 Appliances arrived, including a front-loading washer and dryer that dwarfed our new laundry room. At first, we were a bit taken aback by their girth, but we appreciated the ability to do large loads of laundry, even in a small house.

Using the smaller bedroom suite from our old guest bedroom worked well in the new master bedroom; the change from king bed to queen was no big deal. We had tested out the possibility while we were still at the old house, but there we still had the option to go back to the king. Now we were committed to the queen bed and found it easy to adjust.

The new kitchen was a revelation. What looked small hid a vast amount of storage for pots, pans, dishware, glassware, and pantry supplies. Even some of the items I didn’t use very often, like the Crockpot and the electric wok, earned spots in the cookware storage closet. Some little-used items went to the basement, but weighty and more critical items (my workhorses: a stand mixer and a food processor) slipped in once we shifted a shelf to a higher position in one of the cabinets.

Everything fit, with very little excess to work around or with. Yes, we moved some bins to the basement for closer review, but most of what we kept fit in the smaller space of the new house.  We knew exactly where we were going to put things.

That’s what happens when you downsize: a lot of your decisions are made in advance and you can focus on more purposeful living.

The fun part was settling in. It felt like we went on vacation, except all our stuff was in the hotel rooms. Everything was new, yet familiar.

Our first weekend in the new house, our development held a yard sale. It was perfect timing for me, since there were still plenty of little things I wanted to move along to new users/owners. Friday night I priced as many items as I could. Saturday Bill set up some tables and we put out our goodies. We were thrilled to see so many people come by, some walking, some driving. The walkers were often people from our community, so we got to meet some neighbors and make a little extra money. A double bonus!

So there you have it. We sold the old house and settled in at the new house within six months. We unloaded at least half our possessions during the transition.

Although I can’t speak for Bill, I will tell you that I feel more organized and am happier for having gone through the process. It’s changed my decision-making and my priorities.

It’s not easy. It’s not painless. But it is worth it.

Next, let’s talk about minimalism.