While the flies still buzzed around the groundhog’s head in the back yard, I searched online for every angle I could think of about disposing of a dead animal.

Legally, we couldn’t throw his corpse in the river. Tempting, but illegal. 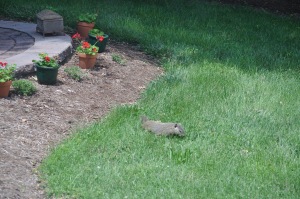 If we buried him, we’d have to dig at least six inches down into the soil. Because our house was primarily built on rock that required blasting to create the foundation, we thought that was impractical.

If we drove him anywhere to dispose of him, the car would smell bad for the rest of its mechanical life. We’d never be able to sell it or trade it.

In desperation, we decided to do what the average suburban person with no discernible wildlife skills  would probably do. We decided to throw the corpse into our garbage can.

Normally our waste disposal company picked up our garbage on Friday morning, which was, happily coincidentally, the next day. With luck, we could put the groundhog — whom I christened Bucky — into the garbage, and the truck would pick it up and haul it away before anyone, particularly  the new owners of the house and their real estate agent, was the wiser.

Bill got several large black garbage bags. We knew we’d have to double-bag Bucky, at the very least. I was worried that Bucky might spill open when we tried to put him inside the bags. We had already put all of our yard and garden gear, including shovels and pitchforks, into the storage unit, so I got out my pink heavy-duty Williams-Sonoma kitchen gloves, put them on, and Bill shook open the bags. Then I held my breath, picked up Bucky by the tail and lifted him up.

Bucky was intact and self-contained.

If either of us were less panicked and more entertained by this spectacle, we could have taken the perfect Facebook photo of Sandy, the Great White Groundhog Hunter holding up her prey with her pink-glove-clad hands.

Neither of us thought of that until much, much later.

I heaved Bucky’s corpse into the depths of the bags and with some satisfaction, we closed them and dumped the whole package into our garbage can. We stood back, sweating. It was then that we realized that the early heat wave we were a part of was going to make Bucky’s presence more odiferous that we might want.

One of the things we read online was that if you bury a dead animal in the soil you should include some powdered garden lime to help keep the scent from drawing other animals and to assist with decomposition.

If it works for burying animals, it must also work for bagged animals, too, right?

Bill went off to the local garden center for a bag of lime. When he came back, we opened up the garbage bags to apply the lime (ugh, part 2) and then closed them and added a third bag for good measure.

We wheeled the garbage can to the end of the driveway, secure in the knowledge that the garbage truck would pick him up early the next morning.

Except the truck didn’t come.

At 9:30 Friday morning, the garbage can still sitting at the end of the driveway stinking of Bucky, we left the house to allow the new owners to do the walkthrough. My stomach was clenched like a fist. I just didn’t know for sure what would happen.

By 11:oo, we were sitting in the real estate office waiting for everyone to arrive for settlement. When everyone showed up, the big topic of conversation was how terrible traffic was. The new buyers and their real estate agent didn’t get to do the full walk-through.

We had already arranged for a one-week rent-back from the new owners of our old house to cover us an extra few days so we could move into our new house without having to stay in a hotel. We agreed to another “final walk-through” the following week.

No one mentioned Bucky or any odd smells.

When we got back to the house around 2:00 p.m., the garbage was still there. It hadn’t been picked up. My first thought was, “Bucky stinks so much they know he’s in there and won’t take him!” but I looked up and down the street, and no one else’s garbage had been picked up either.

About an hour later, the garbage truck rumbled through. I peeked out the window and watched while the garbageman picked up Bucky’s bag and tossed him into the back of the truck. It didn’t faze him. I guess on such a hot day, by three o’clock in the afternoon, everybody’s garbage stinks and the workers are used to it. Bless ’em.

The final walk-through the following week went off without any trouble except for a dead battery in one of the garage door remotes. Easily fixed. Everyone was happy.

Bill and I moved on.