Bill did the work of looking for a storage unit that would suit our needs. The biggest considerations were size, cost, and location.

We chose Storage Depot because they had several size options

available, they were running a three-month pricing special (it was January, after all, not a time most people are looking to move their stuff!), and it was not only close to us but to major traffic arteries as well. We weren’t sure where we would be moving, so being close to major highways in the area was vital to us.

It was not. We wouldn’t know that for a few weeks, but trust me, it was smaller than the amount of stuff we tried to put in it.

We booked the unit for January through March and got to work. Many of the items we chose to move were items that the stager recommended we remove. We also planned to move many, many things that we thought we might want to use in the new house. BUT – and this is a huge BUT – we tried to keep in mind the downsizing aspect of our decision to move.

The process of going through your belongings and choosing what stays and what goes is a monumental task. For an idea of how to begin, I read the books The Life-Changing Magic Of Tidying Up by Marie Kondo and Simplify by Joshua Becker. Then I looked for articles and websites on downsizing, reducing clutter, and minimalism. I discovered that Joshua Becker’s Facebook feed was chock full of ideas and included a daily motivational reminder with good tips.

My method was pretty simple and one that many professional organizers recommend: categorize your items into four piles/bags/boxes. Throw Away, Donate, Sell, Keep. Because of our desire to downsize, I added the caveat that the Keep pile should be the smallest.

Acknowledging that some things we used for staging were not going to our new home, the process got confusing at times. For example, our dining room set consisted of a golden oak table that seated eight, including all eight matching chairs, a corner cupboard/hutch, a sideboard, and a jelly cabinet that we used for a liquor cabinet. To declutter, we stored four chairs and the jelly cabinet, even though we knew that we would sell the entire group together later. So the chairs and the jelly cabinet entered the storage unit early on. When we got to the point of selling them, we had to unearth them from behind all the items we stored. 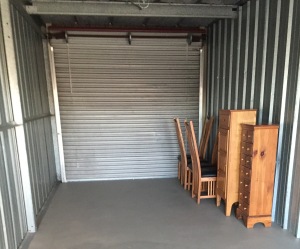 We filled the storage unit with furniture and cabinets whose futures were in question. We added the bins and bins of musical equipment and personal items, including off-season clothing, which cluttered the house. We did this room by room, day by day, car-trip by car-trip. After a couple of weeks we were exhausted – and we still had lots more to move. By the time February rolled around, I wondered if we were doing enough or if we did too much.